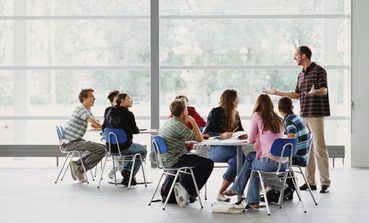 In contrast with residential treatment programs, which are more clinically centered on and primarily provide Behaviour therapy and treatment for adolescents with serious issues, the focus of a TBS is toward emotional and academic recovery including structure and supervision for physical, emotional, behavioral, family, social, intellectual and academic development. Therapeutic and educational methods vary greatly; with the approaches best described as a “tapestry” of interventions. The typical duration of student enrollment in a TBS range from one to two years. Students may receive either high school diplomas or credits for transfer to other secondary schools. Some therapeutic boarding schools maintain educational accreditation. In his 2005 book, journalist David L. Marcus estimated that dozens of therapeutic schools have been established in the United States since the 1970s, operated by both private corporations and nonprofit agencies. David described one of these schools as follows:

The School’s curriculum defies easy explanations. It was a patchwork of theories of leading behavioral psychologists of the twentieth century, mixed with methods from twelve-step programs, California feel-good movements, Big Sur group processing, and Esalen-style encounters. The curriculum drew from the pioneering Swiss philosopher and psychologist Jean Piaget, who believed that children must learn at their own pace. And Erik Erikson, who argued that a person’s ability to resolve conflicts during critical transitions early in life is a gauge for later happiness. And, especially at base camp, the school borrowed from Abraham Maslow. He had charted a hierarchy of needs, starting with the physical – air, food, water – and ascending through self-esteem, belonging, love, and finally to truth and beauty. The school wasn’t trying to turn rampaging teenagers into cherubic clones. It was trying to help kids regain their talents, to give them tools to deal with inevitable setbacks and pain. The School started by decreasing newcomers to coping with primordial needs – potable water, shelter, a comfortable temperature. As they fulfilled Maslow’s hierarchy, they started to think about who they really were.

Effectiveness
In 2006, the results of a study conducted between 2003 and 2005 involving 993, students from 9 schools was presented at the 114th Annual Convention of the American Psychological Association. The study made use of the Youth outcome questionnaire certified by BYU in terms of internal consistency, test-retest reliability, and concurrent validity as well as being a valid and dependable self-report measure of psychosocial distress in youth psychotherapy research.